If you’ve ever been to a farmer’s market before and seen the vast array of vibrant produce displayed in neatly stacked, abundantly filled wooden crates, all available at reasonable prices, then you’ll know what it is to come home with just a few more (paper bags full of) vegetables than you originally set out for.

Luckily, bell peppers are incredibly versatile and can be an amazing addition to several dishes. They can be used in soups and sauces, stuffed, roasted, fried, on pizza or not on pizza (at least it’s not pineapple), added to tarts, and tossed in with salads – the possibilities are endless! But even so, sometimes you find yourself with bell peppers to spare.

If that’s the case, you’ll probably want to know all the best ways to store your brood of bell peppers.

Luckily for you, we know a few. We’ll walk you through each simple step to keep your bell peppers fresh until you’re ready to discover yet another exciting new way to incorporate these delicious vegetables into your diet. 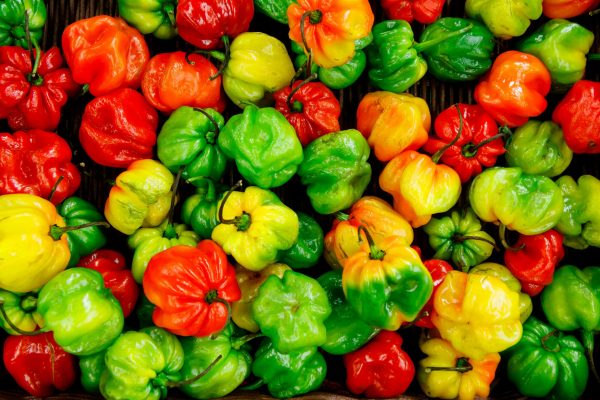 A Note Before We Get Started

It doesn’t matter whether you’re buying red, green, or anything-in-between bell peppers. The same principle applies to all vegetables when it comes to preserving your produce: the fresher it is, to begin with, the better.

In order to give your bell peppers the best chance at staying fresher for longer when you’re buying them, try to choose ones that have shiny, unmarked skin. They should be firm to the touch, as this is what gives that satisfyingly crunchy bite to raw bell peppers.

Stay away from bell peppers that appear to have any wrinkling or if you can see bruising beginning to appear, as these will go bad faster, which makes them harder to store.

How to Store Bell Peppers in the Fridge

While it’s okay to store certain vegetables such as onions, eggplants, potatoes, and tomatoes (although yes, we know that technically these are fruit) without refrigeration when they’re whole, bell peppers require a cooler environment to stay fresh for longer.

The first step to storing your bell peppers in the fridge is to wash them, then dry them fully with a paper towel to ensure there is no moisture left on the bell peppers. Then simply pop them in your crisper until ready for use.

A grocery bag is a great way to extend the life of your bell peppers further, or you can even get crafty and create your own by poking holes through a plastic bag. These allow for good airflow, which helps bell peppers retain their fresh, crunchy bite.

Bell peppers that have been stored this way will typically keep for about a week, although green peppers can last slightly longer than other colored peppers.

How to Store Cut Bell Peppers

We’re all guilty of buying food with the best of intentions, only to not end up actually needing it all. Maybe you just want to save half for tomorrow’s lunch, or maybe you’re a bit of a maverick and took the recipe you’re following as inspiration rather than as gospel and decided that actually, half a bell pepper would more than suffice.

Once you’ve sliced into the protective skin, it loses its ability to protect the interior of the bell pepper, which can dry out and lose its firm texture. For this reason, cut bell peppers should be immediately stored in the fridge.

They’re best kept in an airtight container or a sealed freezer bag, or alternatively, you could place the leftovers in a bowl and cover it with plastic wrap. They should last for a few days in this condition, but if you notice any mold or if they start to become slimy, then do not eat them.

How to Store Bell Peppers in the Freezer

Storing bell peppers in the freezer is the longest way to preserve them with their taste intact. However, their texture is altered slightly as bell peppers retain water, which causes them to lose their crunch when thawed, meaning they’re best suited for use in cooked dishes after being stored in this way.

Firstly, slice your bell peppers into thin strips and layer them on a baking tray with a sheet of baking paper between them. Next, place them in the freezer uncovered for about an hour.

Once frozen, pack your bell pepper slices into an airtight container or place them in a freezer bag and push as much of the air out as possible as you seal it.

There are many ways to enjoy preserved peppers, but we think the best way is to roast them first, as this destroys enzymes that may cause your peppers to deteriorate. Plus, it adds great flavor, and you can enjoy them in several ways.

These can last for up to a year in the refrigerator, although their quality dwindles over time.

And there you have it. Bell pepper storage, four-ways. Bon appetit!